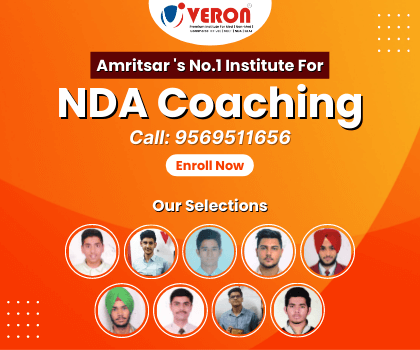 Veron institute is the Best NDA (National Defence Academy) Coaching in Amritsar. If you are looking for an NDA coaching institute that can provide you with the best learning experience, look no further than Veron Institute. This institute is known for its top-notch training facilities and experienced faculty members who will help you achieve your goals. They have a wealth of knowledge and experience to offer their students and can help them prepare for the NDA examination with ease. With Veron Institute, you can rest assured that you are getting the best possible education and support to help you pursue a career in national defence.

What is the Examination/Selection Process?

Candidates can only apply for the NDA exam online through the UPSC website (www.upsc.gov.in). The NDA entry process includes a written exam, an SSB, and a medical exam, after which the recommended applicants are placed on a final merit list. Join Veron Institute to pass the NDA exam. We are on our path to being the best NDA coaching in Amritsar.

Selection Process: To obtain an NDA, you must put out the significant effort. Written Exam and Interview are the two stages of the process.

National Defense Academy (NDA) is India’s only defence service training institute which gives India’s youths an opportunity to serve their nation by joining either of the three reputable services – the Indian Army, the Indian Navy and the Indian Air Force.

National Defense Academy (NDA) entrance exam is the first step towards a youth’s dream to join India’s defence service. It provides an attractive and reputable career option in Indian Armed Forces. By qualifying for the NDA entrance exam which is organized twice a year, an aspiring candidate becomes eligible to undergo the training period in the Academy as a cadet. India’s large youth population base and millions of aspirants applying for NDA has made it very competitive in recent years. As the academy wants the best of its young blood to emerge as a leading officer, we at Veron Institute help you stand out from the crowd and create a moment of glory by cracking the NDA exam. We help you in preparing for the entrance under the direction of experienced faculty.

The examination for the National Defense Academy is a national level examination conducted by the Union Public Service Commission (UPSC) for the recruitment of candidates in the Indian Armed Forces. The exam is conducted in a two-tier pattern, in which applicants who qualify for the written exam must also complete the SSB Interview round. Eligible candidates who clear the SSB interview round must undergo a medical test to match the medical standards of the academy.

Veron Institute is a top-tier institute for NDA coaching in Amritsar. Veron has won the trust of students/ aspirants by producing a proven track record of preparing students for their best selves.

Connecting with the right coaching institute is a crucial step towards cracking the entrance. The best institute for NDA preparation will help you with the right guidance to prepare for the exam. Under the supervision of experienced faculties at Veron Institute, your chances of passing the NDA exam increases significantly as they are aware of the exam and interview patterns, the type of questions asked and the strategy to be followed to complete the exam within the time limit with greater accuracy. 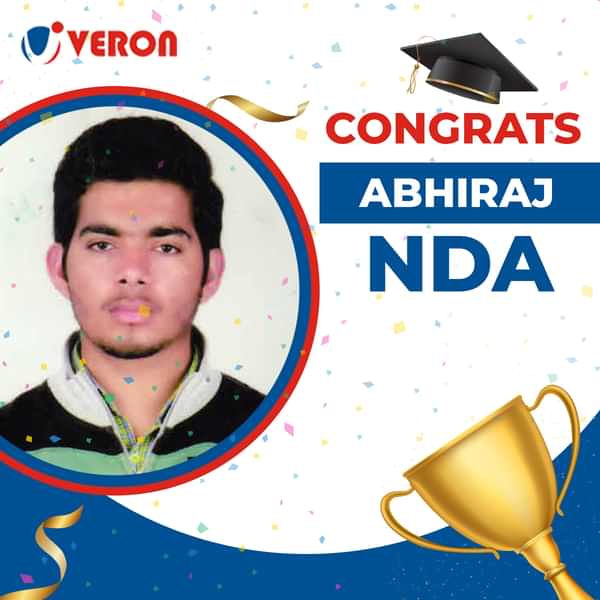 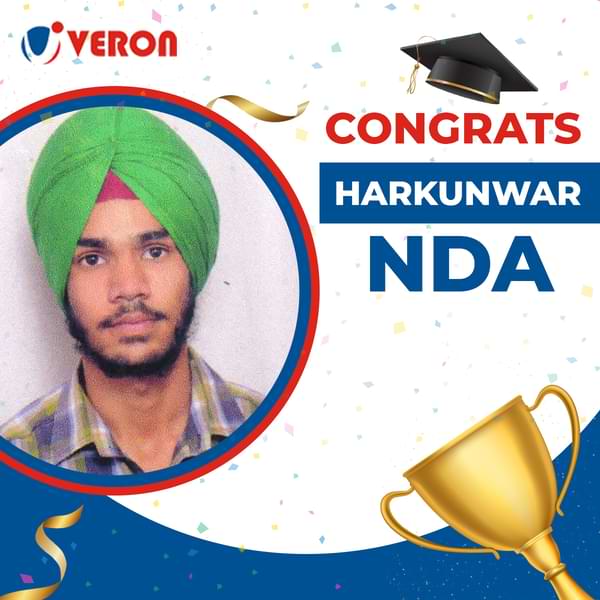 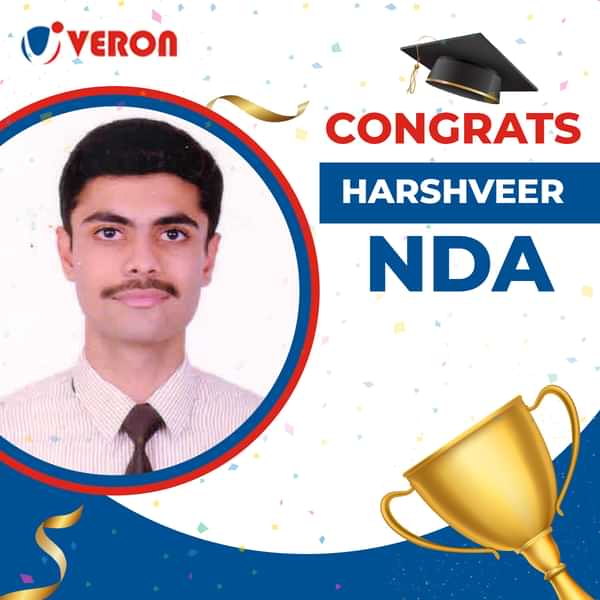 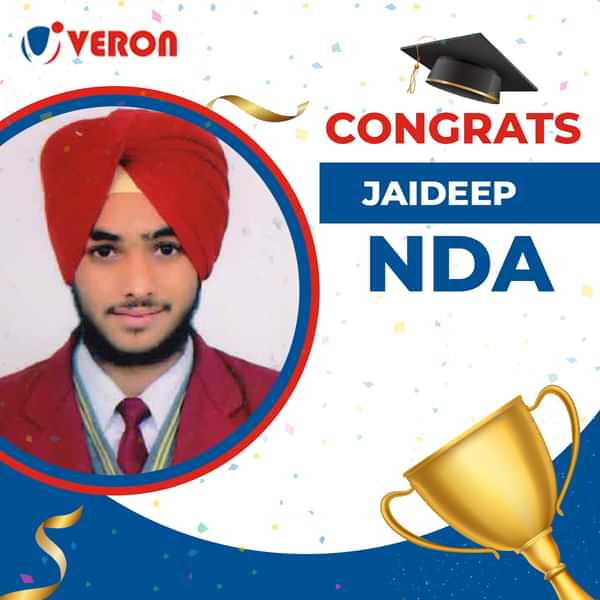 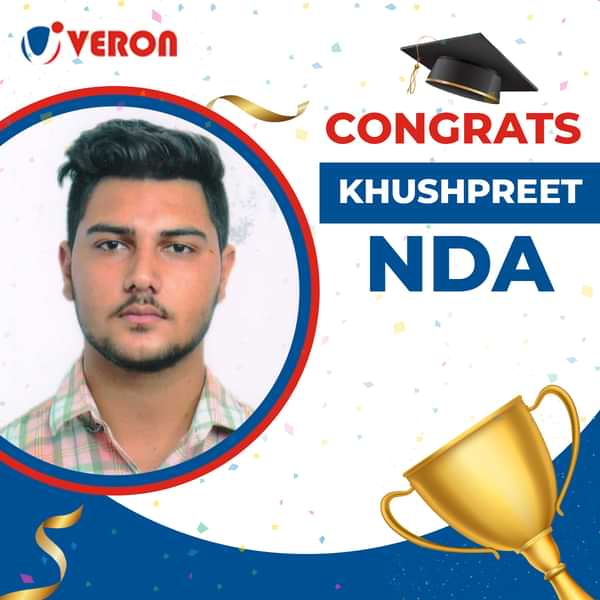 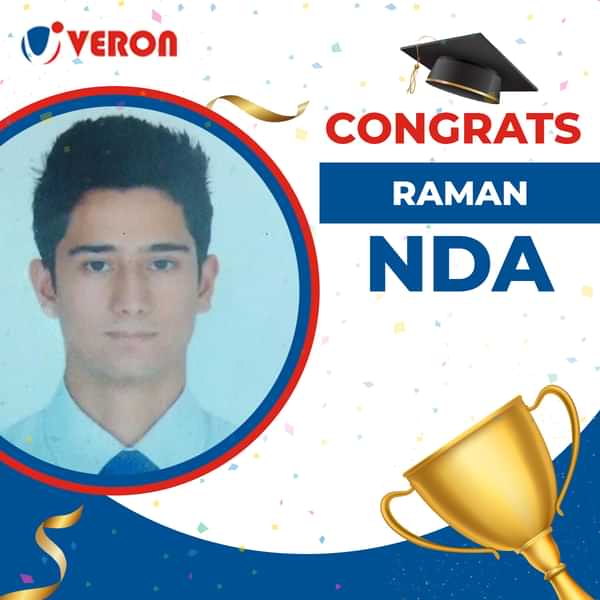 We have designed our NDA classes in different patterns and counsel students during their NDA coaching counselling sessions to enrol themselves where they feel good and confident. The commonly available programs for NDA Coaching Classes are:

For NDA, each student has to pass 3 rounds of the selection process. Each process is tough in its own way and distinctive to get selected in a prestigious institution.

NDA Exam pattern is divided into two parts as per the 12th Standard syllabus.

The first part is all about Mathematics and Second Part is related to General Ability & English.

For General Ability and English

Eligibility for the NDA Exam

The UPSC, as the conducting authority, determines eligibility for the NDA exam. Candidates interested in taking the National Defense Academy Exam or the Naval Academy Exam must meet the qualifying requirements outlined in the commission's official notification.

• The following are the requirements for taking the NDA/NA exam:
• Candidates must be Indian citizens.
• NDA examinations are only open to male candidates.
• Candidates must be between the ages of 16.5 and 19.5 years old.
• For the Army Wing of the NDA, a 12th grade pass under the 10+2 schooling system or equivalent is required.
• Candidates for the NDA's Air Force, Navy, and Naval Academy must have completed a 12th grade under the 10+2 schooling system with Physics and Mathematics conducted by a State Education Board or a University.

What is the Application Fees for the NDA Exam?

The Exam application fees are Rs.100 for general and OBC category but SC, ST candidates are exempted from Exam Application fee.

Registration for NDA tests begins when the commission issues a notification. Candidates will have one month to complete the NDA Application form.
On June 9, 2022, the online application for NDA I1 2022 opened. Aspirants who want to take the NDA/NA test in 2022 must apply online at the UPSC official website.
The following are the steps to filling out the NDA application form:
• UPSC's official website can be found here.
• Keep an eye out for NDA I Notification 2022.
• After reading the message in detail, click the registration link provided.
• Fill in the needed information for registration, such as your name, email address, phone number, and date of birth. Complete the captcha and submit the form.
• The registered cellphone number and email address will receive a Registration ID and Password.
• To continue filling out the Application form, log in with your ID and password.
• Upload the appropriate documents, such as passing certificates, scanned signatures, and photographs, after providing all of the requested information.
• Check the information you've supplied and then click Submit.
• Select a payment method and pay the NDA application fee.
• The registration for the NDA/NA exam 2022 is complete once the costs are paid.
• For future reference, save and download the Online application form.

Ans. As of yet, there is no news of the NDA exam being postponed; it will be held as scheduled.

Ans. No, only single, unmarried men are eligible to take the NDA exam. They must also promise not to marry until they have completed their full training.

Q 5. What happens if an applicant marries after submitting an application?

Ans. Candidates who marry after submitting the NDA application form will not be considered for training, even if they pass the written test and interview rounds.

Q 6. What are the minimum requirements for applying to the NDA exam in 2022?

Ans. For the NDA/NA exam 2022, there are no minimum qualifying marks.

Q 7. How does the NDA I exam differ from the NDA II exam?

Ans. The UPSC conducts the NDA exam twice a year to recruit candidates for the defence forces (Army, Navy, and Air Force). The NDA I and NDA II exams are identical.